adidas will take the “Nightmare” theme a bit further this weekend with the adidas Crazy 8 also known as “Nightmare Before Christmas”. Here is a look at the shoes plus the special packaging sent to us.

Similarities between the “Nightmare” adidas Crazy 8 and “Nightmare Before Christmas: on the laces, tongue tab, heel and other places throughout you can see black and white pinstripes which are taken from Jack Skellington’s outfit. During the movie you can see shades of purple through the sky and terrain, also predominantly placed on the Crazy 8.

The glow in the dark sole, outsole and speckles on the upper also gives an added “Halloween” feel, Jack’s favorite day!

We were lucky enough to receive this pair early directly from adidas. The box resembles a coffin; during the movie Jack Skellington rode in a coffin style sleigh and this is where adidas came up with the idea. Once you open the lid, black lights come on illuminating the entire box and shoes. Sadly the box will not release to the public.

The Nightmare Before Christmas adidas Crazy 8 drops December 21st 2013 (this Saturday) in limited quantities for $125. 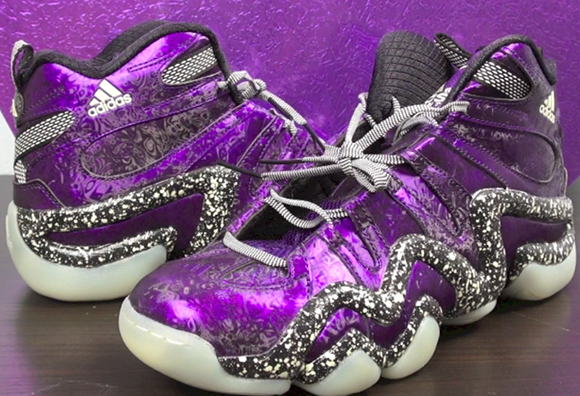