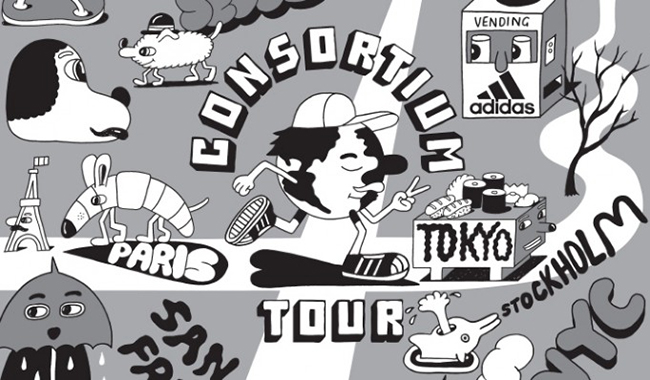 For the first ever Consortium Tour, adidas sends us on a year-long expedition to some of the planet’s most influential sneaker retail outposts – just like back in the days when you actually had to stack up miles sourcing the rarest footwear gems.

To celebrate this global collaboration series adidas has teamed up with a suitably special creative partner. Renowned artist Jeremyville brings his unique style and irreverent humor to the sneaker world with a series of animations and illustrations to commemorate the journey.

Spanning the entire range of the brand’s most iconic silhouettes, the models – aka souvenirs – represent a curated selection from the diverse categories in adidas’ catalogue: from the well-known classics to the most state-of-the art technical styles – re-interpreted by the partners along the way.

In January the tour will start at KITH in New York. The next stop will be at San Francisco’s Nice Kicks, from where we’ll then jet over to Solebox in Berlin. Afterwards they are off to Slam Jam in Milan via Footpatrol in London. Let’s say hi to the ‘hai at JUICE, enjoy French hospitality at Starcow, and take a rest at Seoul’s Kasina. They will holler at the folks at UNDFTD in L.A. before heading out to Tokyo to meet at Mita Sneakers. No world-trip would be complete without a visit to Scandinavia – so SNS in Stockholm is the next destination before the tour comes to an end at its final stop at Miami’s Shoe Gallery.

From bumping into old originals classics in the heart of Europe, meeting new established classics in the new world, visiting a true consortium basketball innovator, plus brushing shoulders with some surprise acquaintances along the way, the Consortium World Tour guarantees a trip to be remembered.