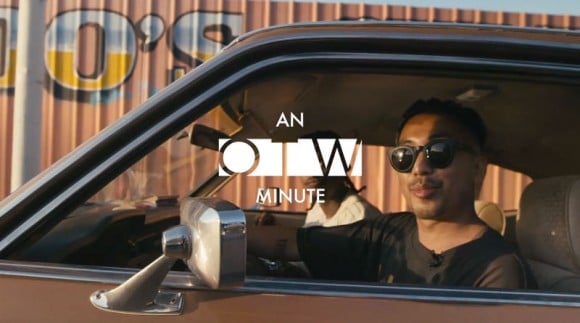 The Vans OTW Collection and OffTheWall.TV present the next installment of An OTW Minute featuring Alexander Spit. An OTW Minute is a joint effort produced by the Vans OTW Collection for Vans’ video platform, OffTheWall.TV, which profiles forward-thinking figures in the realms of art, music and street culture. In episode two, up-and-coming rapper/producer Alexander Spit takes viewers on a ride through Los Angeles as he speaks candidly on a range of topics that have shaped his persona and sound including his childhood, the internet and music.

“Music for me started with a bathroom, cassette tapes, a little boom box,” Spit explains his DIY beginnings in hip hop. “We’d put our little tape recorder next to the speaker of the boom box, we’d press play on the boom box and while the music was playing we would be recording the music and we’d be rapping into the little tape recorder and we would just do freestyles for hours upon end.”

The West Coast emcee exhibits his musicality and unique flow by closing out the episode with an impromptu performance of one of his newest tracks,”Dog on a Cold Sun Roof.” Check out the full clip now at OffTheWall.TV.