HomeAsicsRonnie Fieg Offers Fan A Pair of Kicks For Speakers And 5... 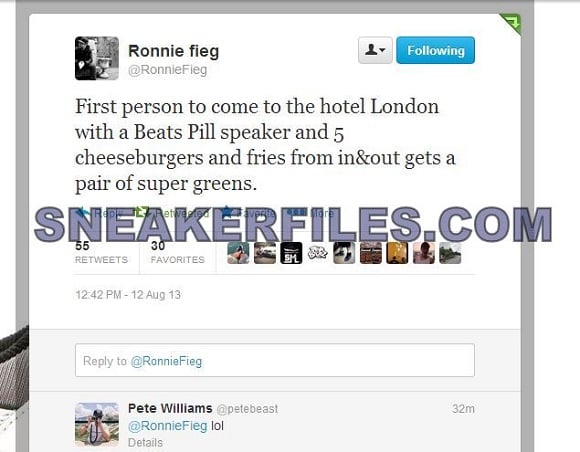 Today, the Twitterverse (and, very likely, all the LA In-N-Out drive-thru’s) just went nuts with a single tweet. Ronnie Fieg, sneaker guru and avid foodie, posted a message via his Twitter account today, calling for any one of his followers to purchase him a specific set of items: one Beats By Dre Pill, a portable music speaker, and 5 In-N-Out Cheeseburgers and fries. In return, he offered a pair of his unreleased Asics Gel Lyte III “Super Green”, the sneaker created specifically for the Soles4Souls charity, which were given away to 300 lucky Haitians earlier this year.

First person to come to the hotel London with a Beats Pill speaker and 5 cheeseburgers and fries from in&out gets a pair of super greens.

After sending out that first tweet, Fieg must have realized the possibility of internet d-bags trolling him repeatedly, so he added a requirement to the arrangement; whomever arrived first would have to tweet a pic of the large clock in the hotel’s lobby, to prove that they were in fact at the hotel. In his mind, this would prevent people from claiming they were there, when they were probably at home in their tightie whities, taking bong rips and laughing hysterically at the thought of an irked Fieg wandering around the hotel lobby, sneaker box in hand, searching for the guy with the sack of cheeseburgers and Best Buy bag. Also, Fieg made it known that anyone who decided to troll him would be “blocked and blacklisted from any Kith release”.

This plan, however, wasn’t as foolproof as he thought, as sneakerhead @KicksAddiction1 quickly tweeted out a pic of the clock, which he must have found online (and fairly quickly at that). Sure enough, within minutes, someone posted a message claiming they were in the lobby, with the pic of the clock attached. Luckily for Fieg, he was smart enough to notice the time in the attached photo was different than the actual time in Los Angeles, foiling the troll’s plan.

No word yet on the winner; as of 3:12 PM EST, there has yet to be an announced winner. Keep it locked at Sneaker Files for updates on this bizarre contest of sorts, as we’ll keep you posted, and let us know below if you would take Fieg up on his offer (if you were in area, of course). Personally, I’m a huge fan of Fieg’s work and I love In-N-Out, so it’s basically a win-win; get an ultra-rare pair of kicks for well below market value, and grab some In-N-Out for lunch. Like I said, a win-win! 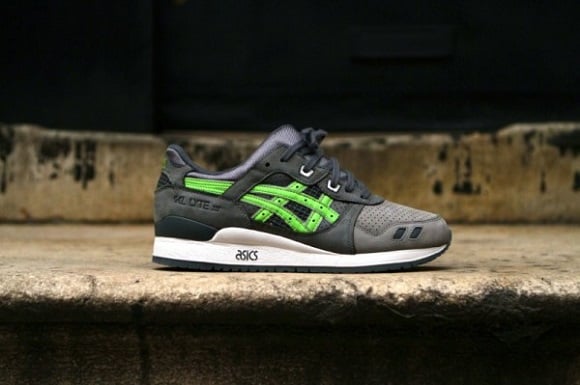