The 50th Annual Grammy Awards took place on February 10, 2008, and Kanye Omari West performed on stage and won a total of four Grammy awards. Though his performance was stellar and his accomplishments were celebrated, there was another aspect of his appearance that left sneaker lovers worldwide in a state of true confusion. Millions of people wondered what sneakers Kanye wore on stage. Were they an exclusive Nike 1 of 1 sneaker? Would they ever release to the public? Were they samples? A couple weeks later Kanye West told the New York Times. “I had on a pair of Nikes, but I can’t talk about those because they’re not out yet.” This gave all sneaker aficionados the hope that one day, they will be able the purchase the same sneakers that Kanye wore on stage.

Though most people were ecstatic at the fact that Nike was collaborating with Kanye West, others saw it as a disgrace that Nike was producing a signature sneaker not meant for athletics. Whatever the case may have been, more and more pictures of the Nike Air Yeezy surfaced as time went on, and opinions were developed of the sneaker. There is no doubt that the shape and design of the Nike Air Yeezy is extremely unique which entails that the sneaker is definitely not suitable for everyone’s taste. West utilized the sneaker in a couple of performances after the Grammy’s, and reported back to Nike on what he did and did not like. Furthermore, the folks over at Nike’s World Headquarters in Beaverton, Oregon spent hours with Kanye West figuring out what elements would stay, what would leave, and what the end product will look like.

A little while later, the first detailed shot of the Nike Air Yeezy hit the net, and the high top sneaker continued to get mixed reviews. On one side of the spectrum, the belief was that the sneaker is a “hypebeast” item that would only be bought because it was made for Kanye West. On the other side, the Nike Air Yeezy was adored for its extremely unique look which set the sneaker in a class of its own. Slowly and steadily, more information and pictures were released while sneaker lovers speculated on the inspiration behind the sneaker. Then finally in early 2009, a couple pairs of the Nike Air Yeezy began to show up on online auction sites, and through the detailed pictures, the inspirations behind the sneaker became known.

Upon first look at the Nike Air Yeezy, one’s eyes will be greeted by the high-top design which hosts an unique forefoot strap. While designing the sneaker with Mark Smith from Nike INC, Kanye West put a great amount of focus towards creating a stylish sneaker with an extremely high comfort level. Thus, the Nike Air Yeezy hosts a thick sock liner as well as debossed ankle collar pods to keep the sneaker extremely comfortable while still looking great. The aforementioned forefoot strap yields a recurrent “Y” pattern on it which is meant to represent Yeezy. To give the sneaker a classy appearance, the Nike Air Yeezy has been decked out in full grain leather while the strap comes in patent leather. The midsole of the Nike Air Yeezy comes straight from the Air Jordan III (3) and Nike Air Assault which both released in the late 1980’s.

Overall, the Nike Air Yeezy, the first signature Nike sneaker made for a nonathlete, hosts a unique shape and design which mixes Nike’s impressive footwear history with key aspects of today’s sneaker culture. To sum it all up, Kanye West worked with Nike and Mark Smith to create a modern classic that can be worn anywhere, anytime, and still look fresh while not sacrificing comfort.

The Nike Air Yeezy is set to release in only three colorways in Spring 2009. The first pair hosts a Zen Grey/Light Charcoal colorway, and released in April 2009. The second Nike Air Yeezy, the Black/Black style, will drop in May 2009, and the third sneaker contains a Net/Net colorway. 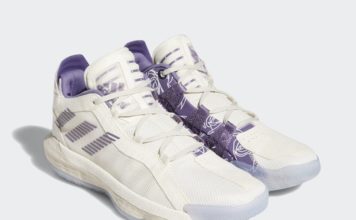