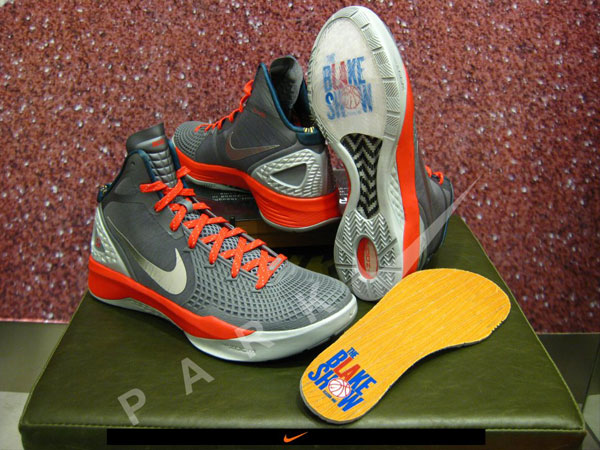 What would Blake Griffin do if he weren’t an NBA player? With our first look at the new Nike Zoom Hyperdunk 2011 Supreme “The Blake Show” it is likely that he’d have his own talk show.

After seeing Kevin Durant’s Nike Zoom KD IV “Weatherman”, the new Blake Griffin Hyperdunk 2011 Supreme is the next model to follow in the Nike Basketball “Lockout Pack,” a collection inspired by NBA player’s and their supposed alternative career path. With the return of the NBA season though, we can only imagine what other “lockout” sneakers we’ll see on the court from some of Nike’s most notable players.

The “Blake Show” Hyperdunk 2011 Supreme features synthetic grey uppers with orange and navy blue accents found on the midsole and inner lining. Interestingly enough, the shoe displays a “Blake Show” graphic beneath a translucent section toward the front, a hardwood inspired insole, and is finished off with a metallic silver Swoosh and back heel counter.

The Nike Zoom Hyperdunk 2011 Supreme “The Blake Show” is set to release December 1st at Nike Park in the Philippines. There is currently no word on a stateside release date, but be sure to keep it here with SneakerFiles for more info!