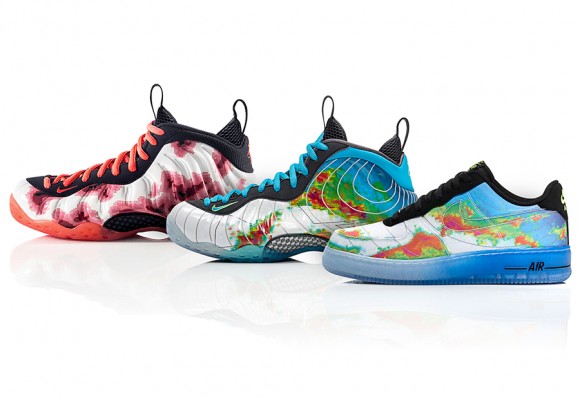 Alright sneakerheads, we have a bit of information to share with you all in regards to the release of the Nike Weatherman Pack. On August 30th, sneakerheads will see the arrival of both the “Weatherman” Nike Foamposite One as well as the Nike Air Force One Low. In case you were wondering about the “Thermal Maps,” they will be releasing on September 28th. Now that you all know when this latest batch of graphic kicks from Nike will be releasing, which pair are you sneakerheads most excited about copping? Read on after the jump to check out both a brief word from Nike along with some dope new images of the previously mentioned kicks.

Graphic, Doppler-esque depictions of inclement weather patterns grace the uppers of each shoe. The blue colorway demonstrates a quick transformation from calm to intense, while the red represents the constant pounding of a soaking thunderstorm.

The Nike Weatherman pack will be available at select Nike Sportswear retailers beginning Aug. 30. The red version of the Nike Air Foamposite One will go on sale beginning Sept. 28.