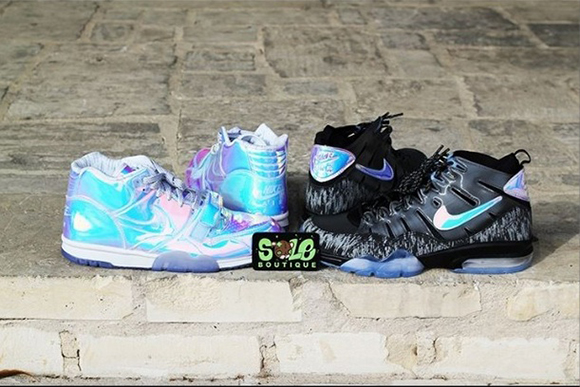 With the NFL coming around to the second round of playoffs with only 8 teams left, Nike thought it was time to unveil the “Super Bowl” Pack that has been accustomed to dropping right before the big game. This year’s pack features two dope classics with the Air Trainer 1 Mid and the Trainer Max 94 with a shimmering, glossy theme for this year’s ‘ship. The Air Trainer 1 Mid is covered head-to-toe in a shiny metallic looking texture with a chroma effect between light blue and purple. Both shoes share an icy translucent outsole as well as the ever-changing Nike Swoosh and heel pieces. The Trainer Max 94 is majority black throughout the upper with scratches of silver on the toecap and around the midsole. No official date for when these plan to make a release but be looking out for January 24-26th (the weekend before) or February 1st, the day before the game.

How do you feel about this year’s Nike “Super Bowl” Pack? Tell us in the comments section below and stick with Sneakerfiles for celebrity kicks and much more!