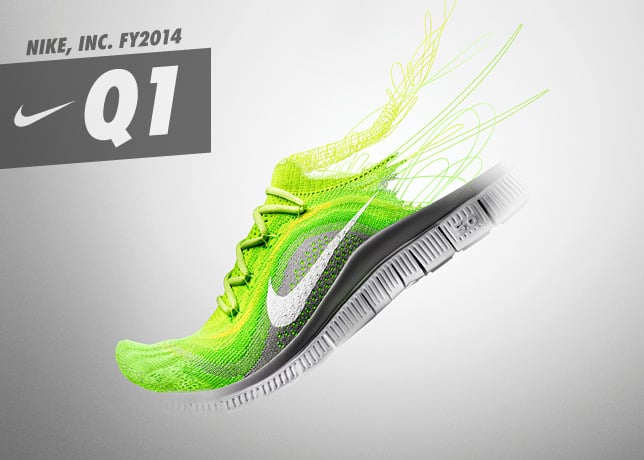 If there’s anything you need to know about Nike, Inc., it is that the company and brand is doing well and will continue to deliver on its promise to render the consumer innovative products and experience. As the brand has motivated and inspired millions, assisted in athletic development and growth, and revolutionized the running market with the all-new Nike Free Flyknit, it would only make sense that Nike yield positive results. To put things into perspective, Nike, Inc. has just announced it’s first quarter results:

“We had a great first quarter driven by our unrelenting commitment to delivering innovative products and services to athletes around the world,” said Mark Parker, President and CEO of NIKE, Inc. “Our powerful portfolio of businesses combined with unmatched leadership and resources allows us to capitalize on opportunities that drive long-term value for our shareholders. I am more excited than ever about our potential to continue to innovate with purpose, and fuel NIKE’s growth.”*

Starting in the first quarter of fiscal 2014, the Company changed the reporting structure for what was historically identified as Other Businesses. Hurley and NIKE Golf have been included in the overall financial results for the NIKE Brand and for individual geographies, reflecting the operational integration of these businesses into the NIKE Brand category offense. Converse will now be reported as a separate segment, reflecting the ongoing operation of this brand as a stand- alone business.