The RZA, the GZA, Method Man, Inspectah Deck, Raekwon., Ghostface Killah, U-God. Masta Killa and Ol’ Dirty Bastard (R.I.P) were once all members of the hip-hop group the Wu Tang Clan. The group was originally formed in 1991 in Staten Island, New York. The Wu Tang Clan emerged as a hardcore rap group with a gritty style that set its self apart from other rappers.

Throughout the 90’s the Wu Tang grew in popularity catching the eyes and ears of Nike. It was until 1999 when Nike and Wu Tang got together for a special Dunk High entitled the “Wu Tang Killa Bees Dunk High” named after one of the many Wu Tang affiliates. The Dunk High consisted of black and bright goldenrod mimicking the “Goldenrod Dunk High” which returned in ’99. However, for the 36 pairs of the Nike Dunk High Wu Tang Clan that were given to the group and its friends, it is recognized by the trademark “W” logo on the tongue and heel. Due to its rarity and age, finding the Wu Tang Dunk High has become an extremely difficult task and when it does pop up it can range anywhere from $5,000 to $7,000. 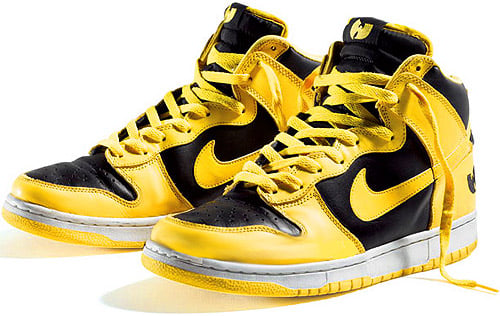