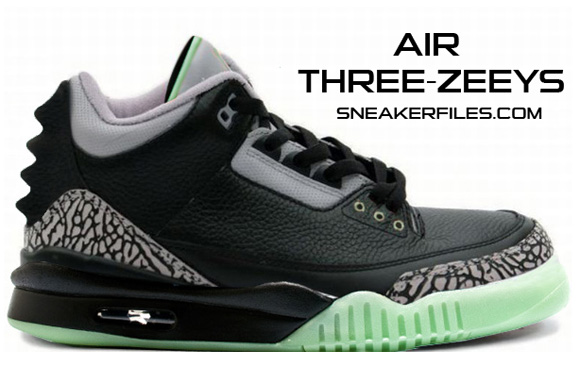 For all you sneakerheads who have been fiending for some new heat, the wait is over. The folks over at Nike and Jordan Brand have answered the prayers of all sneakerheads.

Having recently seen the Air Jordan ‘Threezy’ III Pack created by sneaker customizer DeJesus, there appears to be a massive release on the way. Despite the rumors and speculation surrounding the possible third Yeezy 2 colorway, the picture above says it all.

Despite Yeezy’s infamous “jumped over the Jumpman” verse, it appears the two have joined forces for this latest collaborative creation. In combining the ‘Black Cement’ AJIII with the Black/Solar Red Yeezy 2, the Nike Air Three-Zeey has been created.

If you thought this news was shocking, there’s more. These kicks have been issued a release date as well. Once you wake up from fainting at the news of this latest drop, be sure you mark April 20th on your calendars.

With today being the first of the month, how many of you sneakerheads are going to go camp for these as soon as you finish reading this post? Hit us up and let us know what you think. Keep rocking with SneakerFiles for everything sneakers.