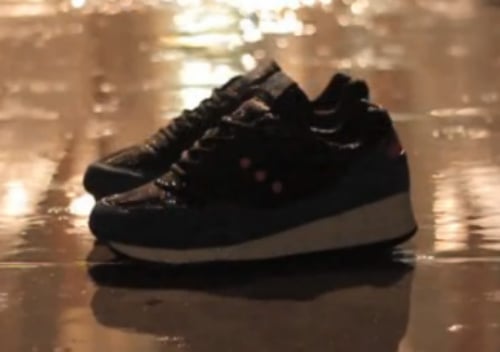 It’s been a while since we’ve heard from UK retailer Foot Patrol, however that will all change as the boutique and collective announced their upcoming collaborative project with Saucony featuring the Saucony Shadow 6000.

As this teaser video may suggest the shoe’s to feature some sort of water resistant upper, read below to learn more about this projects inspiration.

Long established as the entertainment district for much of the 20th century – London’s Soho has a reputation for sex shops, elaborate night life and the flamboyant film industry. With its eclectic atmosphere, bright neons, seedy undertones, dark alleyways and the hustle and bustle of the surrounding area, it’s place of shear entertainment on many levels! Footpatrol sits in the heart of Soho soaking up this ambience…

The term ‘Only in Soho’ started off as an in-house expression between TeamFP, which was used regularly to describe the various strange ‘goings on’ in the area, it’s now become our house hold slogan. We wanted to somehow incorporate this into a future collaboration, so when Saucony approached us we decided to use our place of residence as inspiration!

Stick with Sneaker Files to view an official unveiling of the Foot Patrol x Saucony Shadow 6000 “Only in Soho” likely to come in the coming days of its May 3rd release.