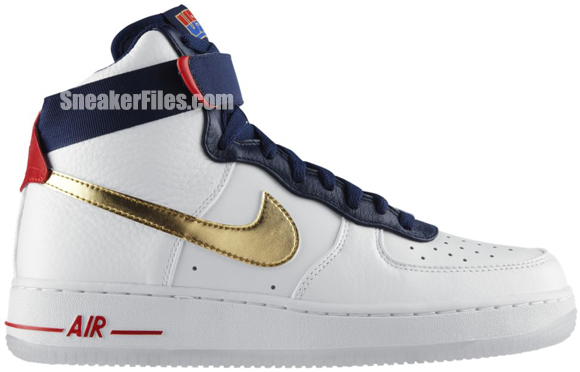 When you mention anything “Dream Team” you should understand that it represents something incomparable, legendary, just like this Dream Team Nike Air Force 1 High Premium.

What’s meant to celebrate this year’s Olympic games and pay tribute to the original “Dream Team” from 1992 (included players like Michael Jordan, Charles Barkley, and Magic Johnson), this themed Nike Air Force 1 model will come complete in a white, metallic gold, and midnight navy colorway, plus feature hits of red, show a “USA” tongue tab, and crush all competition with an icy outsole. In fact, you’ll definitely win if you match these kicks up with one of the “Dream Team” t-shirts that were featured in our look at the Nike Sportswear “Olympic” T-shirt Collection.

Get ready to show up all of your friends with this pair of AF1 High’s when they drop officially on July 1st for $145.