Following suit alongside his family in blue Yankee and t-shirt that dons Michael Jackson’s famous pose from the ‘Bad’ album cover, Spike arrives to the “Bad 25” Premiere during the 2012 Toronto International Film Festival this past weekend dressed to par.

Are the kicks a good match? Check out detailed images below and let Sneaker Files know what you’re thinking in the comment section below. 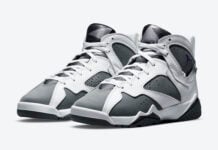