The Dream Team in 1992 dominated the world, with some of the best NBA players of all time including Michael Jordan. The pair he was wearing during the Olympics is the Air Jordan Original 7 (VII) Olympic White / Midnight Navy / True.

Different from any Original Air Jordan 7 (VII), the Air Jordan OG Olympic 7 (VII) features the number 9 on the heel, instead of the usual 23. When Michael Jordan and the Dream Team took the world by storm, his number was 9, so it was only right to have the Air Jordan Original 7 (VII) Olympics with 9 at the heel. 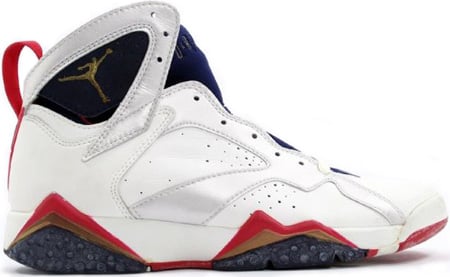