To represent one of the best Olympic Teams in the World, the Air Jordan 7 (VII) Olympic re-released. Some nicknames were given like the Jordan 7 Oly, or Dream Teams. The Retro Air Jordan 7 Olympic is a true piece of history.

The Olympic version of the Air Jordan Retro VII (7) was created to match the Red, White, Silver and Gold colors of the Olympic Jersey and even featured his number 9 that he wore on the back of the shoe. In 2004, the shoe was re-introduced on August 21st with a retail price of $125. 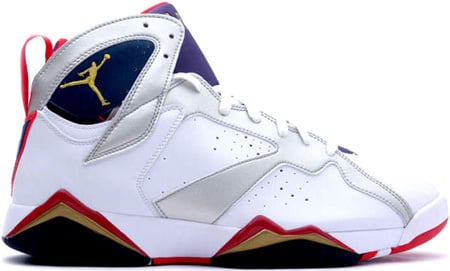