Not since its original release in 1990 has the Air Jordan V (5) Grape been seen inside of the stores, but the Air Jordan Retro Grape 5 (V) made its way back in the stores in the summer of 2006. The White, Grape and Emerald color-way is definitely one of a kind and is one of the most sought after retros.

The Air Jordan Retro Grape 5 (V) was re-released on September 30th, 2006 retailing at $145. However, it’s rarity and high demand has caused its price to shoot up significantly and is now selling in the $200+ region. But, there are many who will pay the re-selling price and with time the price continues to rise. 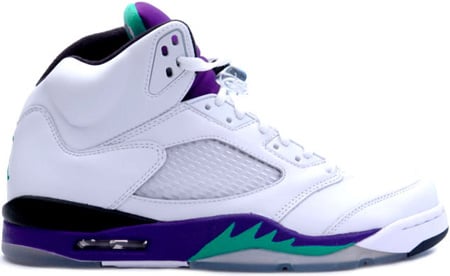