10 years after it’s original release, Jordan Brand re-released the Air Jordan Retro White/Black-Fire Red 5 (V) in 2000 with little to no changes from the original. Featuring a Fire Red, White and Black, this Air Jordan Retro V gets it name from its classic color-way.

The Jordan White/Black-Fire Red 5 retro was released alongside some of the best retro and new mock-ups of the Air Jordan line. In 2000,the Laney, Metallic, White/Silver and Fire Red were released with many other classics. The Jordan Fire Red Retro V was released on January 5th, 2000 with a retail price of $115. 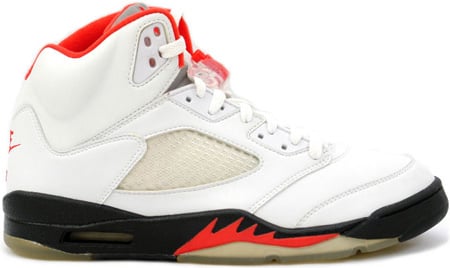