The Air Jordan XIV (14) has often gone overlooked over the years, but with a great color-way for the Air Jordan 14 (XIV) Retro of White / Black – Varsity Red – Metallic Silver who could forget such a shoe. This Retro Air Jordan 14 is one of many Air Jordan XIV’s to be released in 2005 and 2006.

Among the releases included new and old color-ways. However, the Air Jordan 14 (XIV) Retro White, Black, Varsity Red and Metallic Silver model resembles the original, but contains stitching and perforated side panel. A great color-way that would never get old. Released on March 18, 2006 retailing at $150. 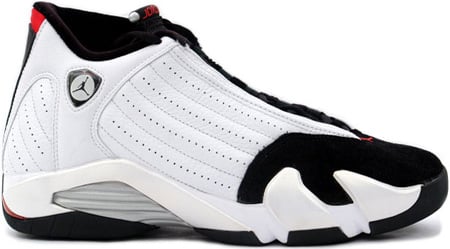