The Air Jordan X (10) Ice Blue Retro was released in the Summer of 2005 and one the first re-release of the Air Jordan X since it was first released over 13 years ago. The Ice Blue Air Jordan X gets it nickname from the White / Obsidian / Ice Blue / Varsity Red color-way in which the Ice Blue contrasts the Obsidian Blue. Ice Blue is used for the lace holders and the sole where Michael Jordan’s accomplishments are inscribed. This color-way is not one of the original few that were released, but is very similar to the simple theme that has been carried throughout the history of the Air Jordan X. 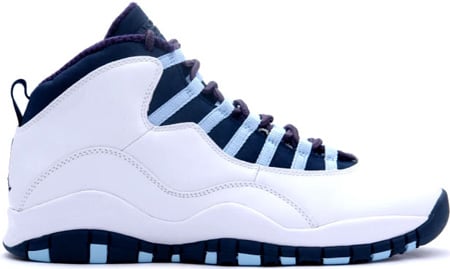