Michael Jordan received his Nike contract back in 1984, fresh out of college, and one of the many colorways produced was the Original Air Jordan 1 (I) White Carolina Blue, also known as the OG Air Jordan 1 UNC.

The Original Air Jordan 1 (I) White / Carolina Blue was a tribute to Michael Jordan’s College the University of North Carolina, as you can see the color scheme matches. Finding a pair of OG Air Jordan 1 White Carolina Blue is not as difficult as finding some of the others Original Jordan 1s. 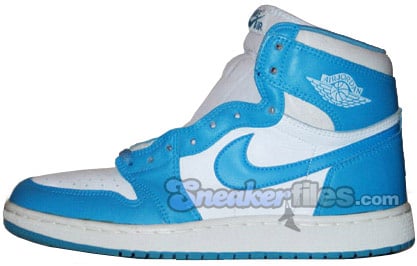