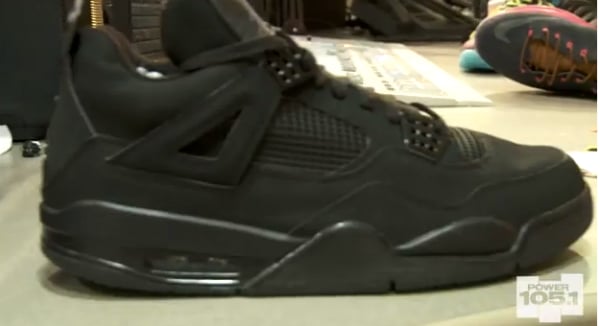 As part of  Power 105.1’s Fresh Out of the Box sneaker review segment featuring DJ Envy, Angel dropped a few gems that we should all pay very close attention to. Why?

Well, because it is said that the Air Jordan IV (4) “Blackcat” will retro again in 2014. Last seen back in 2006, the “Blackcat” has gone under the radar as arguably one of the most underrated Air Jordan styles, hence, it’s time to give credit where its due. While some of our readers have either trashed their ’06 pairs and need another stock, others should rejoice as this retro will likely make a comeback in its original black-on-black state.

Scheduled to release sometime around January or Feburary of next year, keep it here at Sneaker Files for more developing news on the 2014 Air Jordan IV (4) “Blackcat” retro.