Mr. T filled the shorts of Clubber Lang in the Rocky series appearing as the rival to the boxer in Rocky III. A Nike SB Dunk Mid was created with inspiration coming from the fictional character that wore blue and white attire. The Nike Dunk SB Mid Clubber Lang is seen in a white base with ice blue on the swoosh, lacing area and frontal, while Lang’s gold belt is featured on the back heel and patent leather strap. Lastly, the boxer’s red gloves act as accents on the strap and tongue. The Clubber Lang SB Dunk Mid was released in April 2008 and easily purchased at Nike SB accounts. 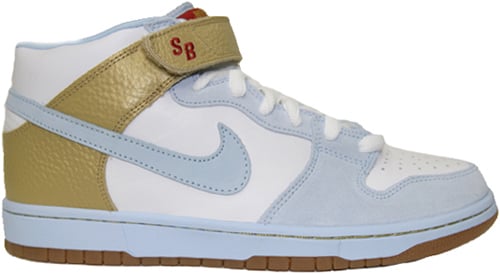