In the March of 2008 Nike SB released a Dunk SB Low paying tribute to one of the first skateboarding video games, Skate or Die. The sneaker is dedicated to the vibrant colors found on the cover that included a variety of colors like black, neon yellow, aqua and blue and other designs. The Nike SB Skate or Die Dunks feature a combination of a leather toebox, blue suede side panels and a neon yellow swoosh. It wasn’t a difficult task getting your hands on a pair of the Skate or Die Dunks as they released at several Nike SB retailers including Active. 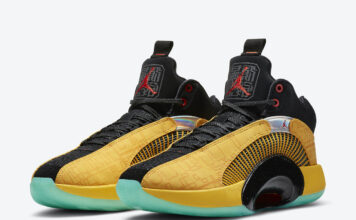