Before the days of Tony Hawk’s signature video game series, there was another skateboarding game that dates back over two decades, 720 Degrees. Atari’s iconic video game is brought back to life in the form of Nike SB’s Dunk Low, known as the Nike Dunk SB Low 720 Degrees and was first sold in May 2008. The sneaker consists of a multicolored palette made up of dark charcoal with a pink swoosh, orange laces, and a checkerboard inner lining taken from the artwork of 720 Degrees. The Dunk Low also incorporated a light blue collar and yellow accents inspired by 720 Degrees as well. The 720 Degrees Dunk SB Low is long gone from store shelves, but shouldn’t be too hard finding a pair for a good price. 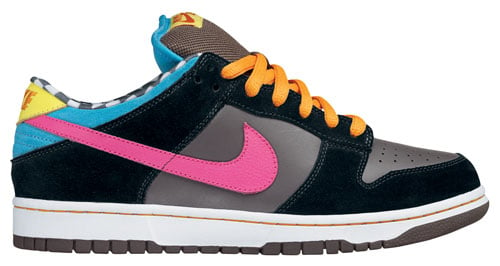