Nike SB’s 80’s Rock and Roll package released in 2008 showcasing legendary groups like this Nike Dunk SB High Motley Crüe. Dr. Feelgood, which is revered as one of the group’s best albums ever and is the inspiration of the March 2008 Dunk SB High. The Nike Dunk SB High Dr. Feelgood utilize the cover of the album and features mostly forest green with a red swoosh, dark green mid-section and a snake scale design completes the look appearing around the ankle and on the toe box. The Dr. Feelgood SB Dunk High was sold at most Nike SB retailers at retail. 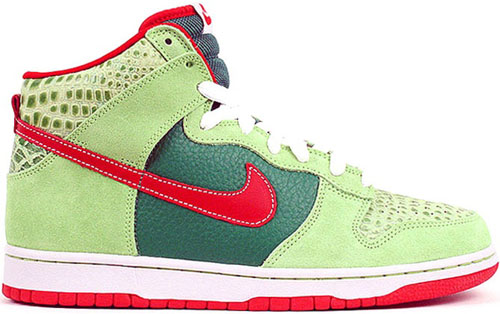