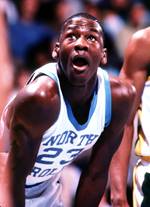 During the summer before Michael Jordan’s senior year in high school, he attended the nationally renowned Five-Star Basketball Camp, where he met UNC’s head basketball coach Dean Smith. Smith began recruiting Michael to play for the Tar Heels, and in November of 1980 MJ signed a letter of intent to attend UNC.

In 1981 Michael Jordan accepted a full basketball scholarship from the University of North Carolina, in the state where he was raised. Michael was only the fourth freshman to earn a starting spot under Coach Smith.

For most of Mike’s freshman year, the spotlight was on Tar Heel forwards James Worthy and Sam Perkins, who later went on to play in the NBA. 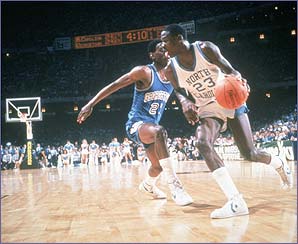 As a freshman, he scored the game winning jumpshot in the 1982 NCAA Championship game against the Georgetown Hoyas, with a final score of 63-62. This was the first mark left by the living legend.

Jordan was selected as College player of the year for the 1983-1984 season. Jordan left college after two more seasons with the Tar Heels in 1984 to play for the NBA. He was selected third overall pick by the Chicago Bulls in the NBA draft.

Before playing with the Bulls, Mike had one final stop- the 1984 Summer Olympics, where he was a part of the US Olympic Basketball Team under Coach Bobby Knight. Michael Jordan led the US team to victory with a record of 8-0 to snatch up the Olympic Gold. 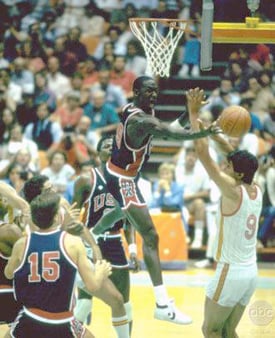 the Olympic Games as a part of the U.S. Olympic Basketball Team.

The United States defeated China in the opening game of the Olympics with a score of 97-49. Every single player on the team scored points, with Alvin Robertson leading with 18 points. Next, U.S.A. defeated Canada 89-68 with Michael Jordan leading the pack with 20 points.

Once again, every U.S. player was able to score. The U.S. rolled over Uruguay 104-68 with Patrick Ewing scoring 17 points with nine rebounds. All U.S. players managed to score yet again, this time against France in a 120-62 victory. Steve Alford led in points against France with 18. The U.S., with a 4-0 record, went on to face Spain. At halftime, the U.S. led with a score of only 46-41, despite Michael Jordan’s 18 points in the first half. MJ injured his ankle in the second half of the game and finished with 24 points. The U.S. beat Spain 101-68. Next, the U.S. team went on to face West Germany, where they won by the slimmest margin yet in the Olympics: 78-67. They defeated Canada again with a score of 78-59 and then mowed over Spain once again 96-65 and finished undefeated with an 8-0 record and the much respected Olympic Gold Medal.