During the basketball strike, MJ was deeply considering returning to the NBA. 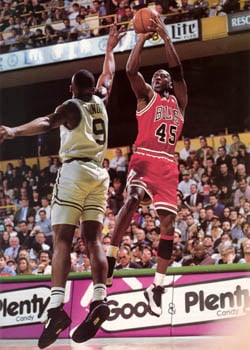 Rumors were going around that he would re-join with the Chicago Bulls in time for the playoffs. He eventually did come back, and when he did the Bulls were struggling with a 34-31 record. Upon his return on March 19th, Michael scored 19 points against the Indiana Pacers. This was not very high for Mike, but just three nights later he posted 27 points against the Boston Celtics, then scored 21 against the Orlando Magic, and 32 against the Atlanta Hawks. This meant that Jordan was back to his old self.

To further show that he had not lost any of his skills, Michael scored 55 points against the New York Knicks. With the 17 games that Mike was back, they had a record of 13-4, and they finished the regular season with a record of 47-35 and made the playoffs. For the last 17 games that Jordan participated in, he led the team in scoring in 11 games, four times in assists, and six times in rebounding. He finished the regular season with averages of 26.9 points, 5.3 assists, 6.9 rebounds, and 1.76 steals per game and 39.3 minutes of playing each game. Despite this, his shooting was off, as he was only shooting .411 in the field. 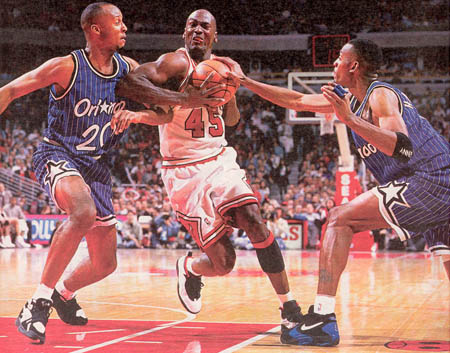 Now onto the Conference Semis, where the Bulls had to face the Orlando Magic. Despite Jordan’s performances in scoring over 30 points in 3 games, the Bulls were defeated 2-4 and denied another Championship. Mike ended the postseason with 31.5 points, 6.5 rebounds, and 4.5 assists per game, but also gave up 4.1 turnovers per game.