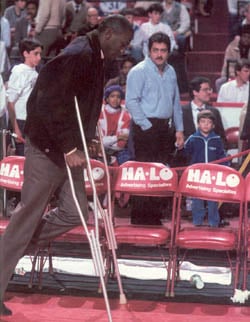 The 1985-1986 season for Michael Jordan was a sad one. Three games into the season Mike had broken his foot against the Golden State Warriors. The Chicago Bulls did win that game 115-105, but now Michael was out for 64 games. Michael was voted to play in the 1985-1986 All-Star game, but his injury kept him from playing. When MJ came back mid March the Bulls had only won 30 games out of the 64 played, but amazingly they held onto a playoff spot. With only 18 games played in regular season, Mike averaged 22.7 points, 2.9 assists and 3.6 rebounds. 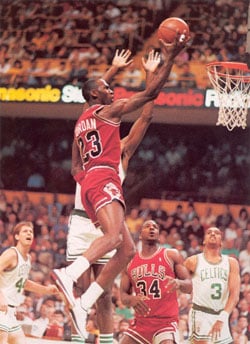 In the first round of the playoffs, the Chicago Bulls had to play the Boston Celtics, and this was not going to be a easy game for MJ and the team. Game one took place on April 17th, 1986 at Boston. That game resulted in a loss, 123-104, with MJ scoring 49 points. Game two was a game to remember for MJ, in which 63 points, which is a all time high for a playoff game, but that game ended in a loss 135-131. After the game, Larry Bird said “I think he’s God disguised as Michael Jordan. No question he had control of the game. He had to have one of the greatest feelings you can ever have. And, as hard as it might be to believe, it’s actually fun playing against a guy like that”. Game three Michael scored 19 points ending the Chicago Bulls playoff for the 1985-1986 season.