Pure money is the nickname given to this Air Jordan 3 retro in white and metallic silver.

Originally released in 2007, the Pure Air Jordan 3 are also dubbed “Pure$”. Predominate all white uppers, small accents of metallic silver are seen through the midsole area.

Retail price was $125. At the time, the Pure Money Air Jordan III sat and could be bought for cheaper than retail. 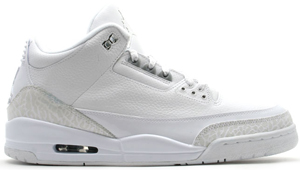