The Black Cement Air Jordan Retro 3 (III) color-way is one of the most well known models and has only been released once since its 1994 re-release. The shoe is simply Black and Grey and with the traditional Air Jordan Retro (3) III elephant print.

The Air Jordan Retro 3 (III) Black Cement model has often been counterfeited which makes the chances of obtaining the real versions a lot harder, with all of the fakes running for a low price. The Black and Cement Air Jordan (3) III Retro can be found today selling around $400 + despite its retail price of $100 when it was first released on July 14th, 2001. 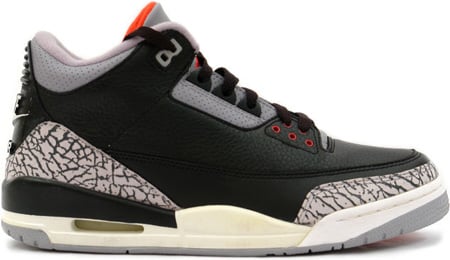