1994 brought on a new episode of Air Jordans, the Retro. One of the first Retros to release is the Air Jordan 3 (III) 1994 Retro White / Cement Grey which released first in 1988. This particular release came out with a over sized Retro card, and a unique box with career highlights.

When first released, many Air Jordan fans did not like the Retro phase, and the Air Jordan 3 (III) 1994 Retro White / Cement Grey hit discount prices. Prices now have gone up to the high $500s (and sometimes more). 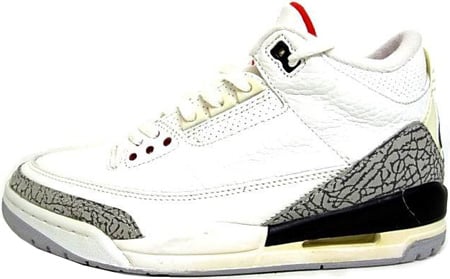