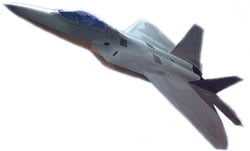 The Air Jordan 22 was inspired by F-22 Raptor Strike Fighter, when you look at the F-22 Raptor you see the light camo spots sharp aerodynamic cuts that can cut through the air like ice. Some of the characteristics of the F-22 can be seen on the Air Jordan 22. 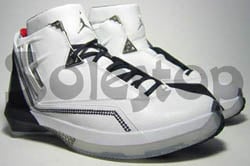 Early samples of the Air Jordan XX2 had vents on the heel with stitching starting at the heel running almost through the toe box. Samples also had a removable strap, but Michael did not like the look of the strap so this was dropped. The shank plate is made from thermoplastic urethane which is also coated with paint containing metallic titanium.

The following was taken from Jordan Brand official website:

FIT/PROTECTION
Titanium shank plate: With its incomparable strength-to-weight ratio and atomic number 22,”tensegrity” patterned titanium provides the ultimate in mid-foot and arch support.
Performance heel: The XX2 is both lightweight and supportive. Thanks to an efficient sculpted design and ultra-stable extended heel counter.
Molded vents: Like the technology, hidden beneath the wings of the F-22, molded TPU vents not only dissipate heat but follow the contours of your ankle for a better fit.
Next-level lacing: The variable speed lacing system on the XX2 features durable titanium-coated eyelets and a remarkably effective lace-lock.
Protective toe cap: A silver cap bearing the world’s most famous number shield, the toe of the XX2.

When head designer of the Air Jordan XX2 D’Wayne Edwards knew the XX1 was heavy, so he had made the XX2 lighter. What caused this is the cutting of foam and midsole material also from the use of TPU composite shank plate.